Walking the Camino for CUMH

Our group of 13 walkers covered almost 120Km of the French Route of the Camino, from a place called Sarria to Santiago de Compostela in Galicia in Spain. Many of the volunteers had different reasons for doing the Camino CUMH Walk, but all of them shared a love of walking and a curiosity for whatever they would encounter on the road. They left behind a world of routine and saw an untouched part of Spain, where time stood still and all they had to do every day was walk for hours through beautiful oak , chestnut, pine and eucalyptus forests, farms, woodlands and medieval towns and villages.

Millions of visitors come to this part of Spain every year, many to experience the Camino and complete at least 100Km of it to officially be honoured as a ‘peregrino’! Dr Brendan Murphy, a Neonatalogist in Cork University Maternity Hospital represented all the staff and patients in CUMH and the group of volunteers were joined by one in a million guide, Chaplain CUH and CUMH, Kieron O’Driscoll, Marianne O’Callaghan, Marion Gilmore, Mairead Twomey, Kerrie O’Driscoll, Michelle O’Leary, Aishling O’Shea, Patricia O’Driscoll, Michael O’Driscoll, Liam Forde and Mary Foley. 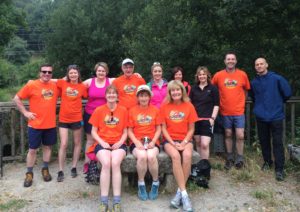 For most of the group, they were meeting each other for the first time but they had the good fortune to have Kieron as their guide and with his great sense of humour, warmth and his indepth knowledge of the Camino and fluent Spanish (which was a bonus!) having lived in Equador for 5 years they were all put at ease.

Most days the volunteers covered over 20Km on foot. As they left Sarria on the first morning, the mist was lifting and temperatures reached the high 20s that day. They weren’t so lucky on the following days, when torrential rain meant that most walkers had to invest in waterproof ponchos!

Their route took them to Portomarin and over the Mino River on the first day. As they crossed the bridge at low tide they could still see the ancient medieval towers jutting above the water, from when the old town was flooded in the 1960s to build a new dam. You can’t ever get lost on the Camino. There are yellow arrows and markings everywhere along the route to guide people along. Over the following days, they walked through Palais de Rei with its famous 11th Century church, the historic old town of Melide, Arzua where the North and French Camino routes meet, Labacolla and on into Santiago on their last day.  In Santiago, the group of volunteers headed to the Pilgrim Office where each of them got their hard-earned certificate to prove they walked 118Km! If there is anything that the group learned from the entire trip it was to take time out, switch off and put away the iphone!

As well as meeting the challenge of completing just under 120Km in six days, doing the Camino is an amazing and unforgettable experience. Our #CaminoCUMH team raised over €14,000 and still counting for the refurbishment of the Quiet Room in CUMH. Thank you to everyone who supported them along the way!